Jennifer Collin lives in Brisbane, Australia. She spent her twenties partying and most of her thirties raising small children while working full time. Now she has the life experience she was told she needed when she was a teenager, she has started writing again. Her first novel is Set me free and it is the first in a trilogy about the Evans family. 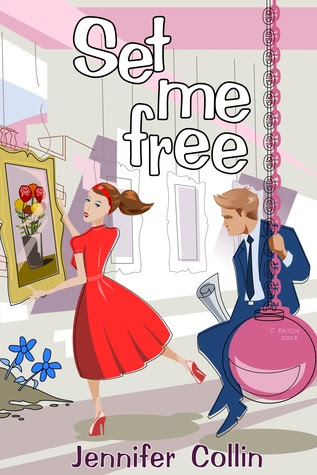 Disastrous love life aside, Charlotte Evans is rather content with her life. Her quaint little art gallery is plodding along nicely, and her sister Emily’s artistic career is about to take off, thanks to her tireless promotion. She even gets to see her best friend every day and drink his delicious coffee in the café next door.


But when dastardly property developer Craig Carmichael comes along, threatening to demolish her gallery and take everything away, Charlotte has an unexpected fight on her hands. Not only is she battling to stop Craig’s development, she’s also struggling against the mysterious magnetic pull that has her on a collision course with Craig himself.
Craig Carmichael is fighting the Battle for Boundary Street on more than one front. The tenants of the building he wants to knock down are mounting a strong case against him and in a hot-headed moment he put his career on the line for a project that is threatening to fail. If the project doesn’t succeed he will lose everything, but for some reason he’s having trouble maintaining his focus.
As their worlds begin to unravel around them, anyone could win. It’s what they might lose that has Charlotte and Craig wondering what it is they really want.

I grew up in Outback Australia where the sky was big and the people few, which left me with plenty of space of daydreams

I live in Brisbane, Australia now, with my gorgeous husband, two daughters, Ketchup the cat and two stuffed toys named Mr Snuggles and Doggie.
If I could be any character in a book I would be Alice from Alice's Adventures in Wonderland (that girl was having a good time) or Minerva Dobbs from Jenny Crusie's Bet Me.
Set me Free is my first book and I am currently in the editing stage of the second book in the trilogy.
Posted by Booky Ramblings.... at Monday, September 23, 2013