T. K. Leigh, otherwise known as Tracy Leigh Kellam, is a producer / attorney by trade. Originally from New England, she now resides in sunny Southern California with her husband, dog and three cats, all of which she has rescued (including the husband). When she’s not planted in front of her computer, writing away, she can be found running and training for her next marathon (of which she has run over fifteen fulls and far too many halfs to recall). Unlike Olivia, the main character from her debut novel, "A Beautiful Mess," she has yet to qualify for the Boston Marathon. 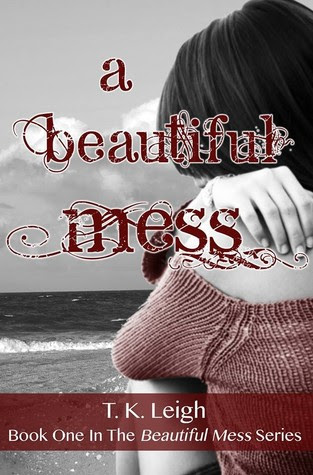 What happens when you lose everyone that promised they would always be there for you? How can you protect the few pieces of your shattered heart that remain?
Olivia Adler is a woman with a troubled past. After losing her parents at the young age of six and being raised by an uncle who she lost years later, she refuses to get attached to anyone, including friends. For the past decade, she has been able to remain unattached to any man, too worried about losing someone to get too close. Until Alexander Burnham walks into her life one night and changes everything. But he has issues of his own. And he’s keeping a secret that could turn Olivia's world upside-down. Will Olivia let Alexander in enough for him to get close and protect her from a force threatening her very existence, or will she push him away, scared of letting Alexander in, in order to protect her heart?
A Beautiful Mess is the first installment of a three part series sure to captivate the heart with a story of secrets, courage, and love.
Recommended for ages 18 and up due to sexual situations, language, and mild violence

1. I am an avid runner, just like my main character in my debut novel "A Beautiful Mess." To date I have run over 15 marathons and, at last count, nearly 40 half marathons.

2. I met my husband in the parking lot at a Jimmy Buffett concert. I was drinking and he was working. (He's the video director / producer on the tour). In fact, I wrote the entire "Beautiful Mess" Series while he was out on tour this spring / summer. When we did the math, we realized that I had written an entire 1500 page manuscript over the course of 10 weeks (give or take a week here and there due to getting bitten by a dog in the leg the day after I ran the Big Sur Marathon, requiring 20 stitches and lots of bed rest. This runner was not happy!)

3. I grew up in New England (Connecticut to be exact), but moved out to California after I graduated from law school. I am a member of the State Bar of California.

4. When I was younger, I became obsessed with theater. All throughout middle school and high school I participated in a youth summer theater program in my hometown of Southington, CT. After I graduated high school, I went on to school to study music. Every summer, I came home and worked as a music director for the program. It was this experience that molded my passion for creativity and different story lines.

5. After my first four years of college, I was starting to hate studying music, so I decided to take a little break from it all and moved down to Florida and worked at Walt Disney World. After 7 months there, I finally "found" myself and went back to CT where I finally graduated with a degree in Criminology and Political Science (after majoring in elementary education, history, and philosophy, just give myself a well-rounded education!)